Mary Bell is a Parisian feminist punk band named after a British child who killed two other children in the ‘60s.

Impressively packed in an epic and monumental artwork by Elzo Durt, “Bellatrix Boadicea” is a tumult of impressions, sensations and acts. The name “Bellatrix Boadicea” itself brings its share of mystery and it may sounds unfamiliar to some of us. This MARY BELL new full length gets its title from Boudica, the queen of a celtic tribe who led an uprising against the conquering forces of the roman empire in AD 60. Another form of sedition comes from the fourteen songs of this album, proceeding from haunted and noisy claims to frenetic punk jolts, from frenzy to introspection. The band is back where they left with “Histrion”, their critically acclaimed previous effort. A record which has managed to convince fans of punk, hardcore and garage and we bet that “Bellatrix Boadicea” will seduce an even larger audience with richer songs and atmospheres. The incisive words of the lyrics deal with what the band describe as their favorite subjects : “revenge, hate, shitty relationships, the circle of life and cats”. The record will come in three color versions ; the one up to preorder is a nice “smokey bone” limited version. 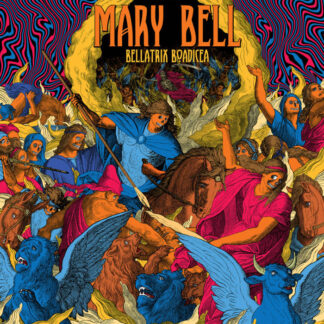