The accordion with its blustering tone isn’t a very prominent instrument in music, except maybe so called German Volksmusik, but Die Atlantikschwimmer’s singer and guitar player Horst Toe had to switch more often from guitar to accordion due to a protracted injury. In 1984 the Bavarian post-punk / New Wave band recorded the follow-up to their well-acclaimed tape on Kassetto Fix for Alfred Hilsberg’s Zickzack and led the music towards a slower, more atmospheric and depressive sound comparable to The Sound, The Cure or Chameleons. The band toured and got airplay on the radio but the mini-album surprisingly didn’t get the expected attention and got lost in music history. Hard to believe since their songs are still timeless classics with its smart (all German) lyrics and memorable melodies. Melancholic, moody and blurry – just like Bavaria, 1984. ( Norman Dietze, Bis Aufs Messer Record Store ) 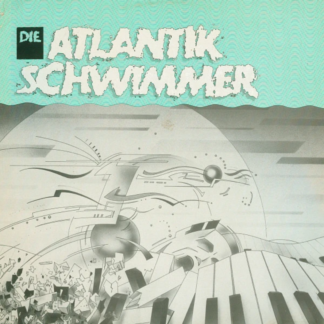