ZANJEER is a punk band from Bremen, Germany. The band was formed in 2020 with the intention of playing uncompromising political punk influenced by bands like Sial, Fertil Miseria, Ratos de Porao etc with lyrics in Urdu, Punjabi and Farsi – languages native to Pakistan, India and Iran. The members come from parts of the globe namely Colombia, Pakistan, England and Germany.

The band is comprised by veterans in their respective scenes, involved in acts such as Inferno Personale, Ex-dom, Cataphiles, Amenazas, Muro, Huffin Paint, Beast as God, Multinational Corporations and Dead Bhuttos. With each member bringing their own vastly different experience, influence and expertise to the table, Zanjeer stays poised to be a relevant act for the current hardcore punk landscape – giving a necessary window into the lives of people from the global south.

Their debut EP “Parcham Buland Ast” contains 6 tracks in 8 minutes, sending the listener into the chaotic world of religious extremism, violent post-colonial nationalism, crumbling environment and economic destruction. Lyrically and musically, this project seeks to narrate the frustration, the anger, and the hatred born out of systematic and consistent oppression. 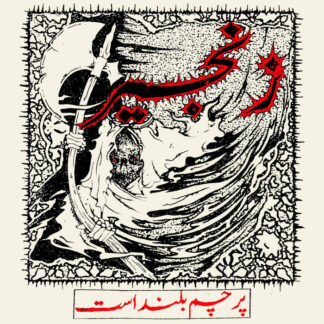