Last year 2021 Wasted celebrated their 25th anniversary and played their earliest songs to sold out crowds in Finland. One of Finland’s best known and most iconic punk rock bands has toured all corners of Europe and seen Finland in and out. Formed in Joensuu, Finland in 1996, the band is nowadays spread over Helsinki-Tampere-Berlin.
The previous album “Here Comes The Darkness” (2013) and mini album “The Truth Will Not Be Televised” (2016) were really well received and the band continued to pull crowds and had people wanting to hear more new songs rather than old ones – the best feedback a 25 year old band can wish for.
Now Wasted is back with a new album, arguably stronger than ever. The upcoming 10 song album will be out on LP/CD/TAPE/DIGITAL on April 8th on Sabotage records and Combat Rock Industry. Some songs continue on the same path than its predecessors, some are introducing darker postpunk and 80s melodic hardcore influences but yet creating an original sound that can be only described as Wasted. Full of energy, pissed off, sincere, in your face and raw. The lyrics are as political and straight forward as in the early days. These catchy and energetic songs meet with thought-provoking lyrics about gentrification, war, misogynists, climate change, racism, conspiracy theorists, mental health… The first single “Break You” is a about the mental struggle in the hectic modern society. 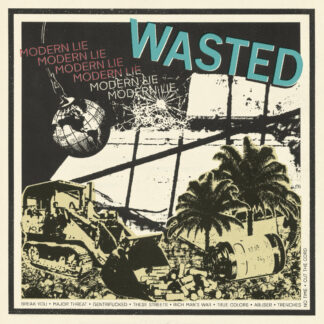