“The Land of Fire and Ice” has long been known for immense natural beauty, ancient folklore, hakarl, aluminum and hairy little horses. What you may not know is that punks were also there from the very start of the show. One of the most important bands to emerge from the thriving Reykjavík scene was Vonbrigði. Though they draw influence from UK and European post-punk and American hardcore, have no doubts Vonbrigði were 100% their own unique thing. They didn’t receive a ton of international attention at the time and sort of faded into history but not without releasing a handful of songs, including a blistering hardcore track on the Rokk Í Reykjavík soundtrack compilation and an incredible EP on the fledgling Gramm label owned by Ásmundur Jónsson and Einar Örn (of Purrkur Pillnikk, Kukl and, more notably, Sugarcubes fame). All of the aforementioned songs are included here along with the rest of the previously (and unbelievably, I mean how is material this amazing not released immediately after recording it? Crazy!) unreleased ’82/’83 sessions. 71 minutes of sweat and grit. Who needs volcanoes when you have Vonbrigði’s fire? All tracks recorded between July 1982 and January 1983 at Studio Hanagal by Kjartan Kjartansson. Mixed and mastered in 2020 at Klakhöllin by Hallur Ingólfsson. Art by Þórir Georg. 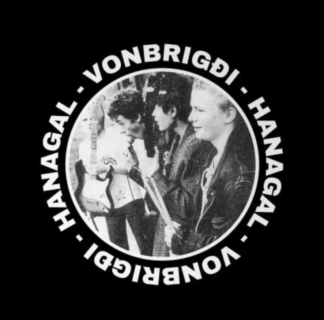