On the heels of their monolithic collaborative LP Mental Wounds Not Healing, the collaboration between industrial-noise post-everything bands Uniform & The Body returns with a second entry, Everything That Dies Someday Comes Back. Comprised of an amalgam of abrasive influence that spans Swans-y dirge and purge, Whitehouse’s clenched-jaw noise, middle-period Ministry’s penchant for metallic post-industrial everything, New Order’s nose for melodic emotionality, and Juicy J-inspired beats, Uniform & The Body’s approach delves deeper down the rabbit hole than before, igniting a sonic world of terror and bliss poised to grip the throats of fans yet again. Prepare for a record that the band self-describes as “the middle ground between Robyn and Corrupted, but weirder.”

The collaboration between the two bands was built upon mutual admiration for each other’s work, which led to bonds of friendship. After the release of the debut collaborative effort, Uniform released the critically praised The Long Walk and embarked on a smash tour with Deafheaven and Drab Majesty, while The Body released the widely acclaimed I Have Fought Against It, But I Can’t Any Longer and took to the road for their own successful and extensive North American tour. The demand for the collaboration eventually necessitated a U.S. jaunt, pairing the collective for rare dates with Author & Punisher and Street Sects on both coasts. It was on those dates that the bands started to plant the seeds for what would become Everything That Dies Someday Comes Back. 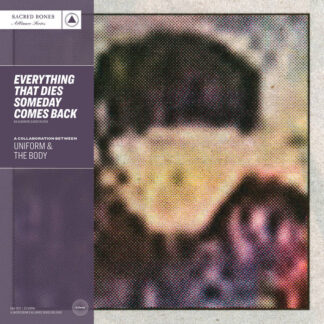 You're viewing: UNIFORM / THE BODY – Everything That Dies Someday Comes Back (Purple vinyl) LP €22,00
Add to cart