View cart “AUSBRUCH Zahn der Zeit LP” has been added to your cart.

Just two years after the previous album Musta Hetki, Finland’s long-running hardcore powerhouse Terveet Kädet return with Lapin Helvetti. Terveet Kädet have come a long way since the ungodly racket leader Läjä and his bandmates churned out in Tornio, Lapland in 1980, but the northern furor shows no signs of slowing down. Named mentor by bands like Sepultura, Terveet Kädet’s current lineup features singer Läjä Äijälä with guitarist Ilari, bassist Jani and drummer Aki. Lapin Helvetti ( “The Hell of Lapland “) dives, as can be expected, headlong into the netherworld and bangs on the gates of hell. Hellish Lapland is filled with 18 tales about the fear of death, estrangement, human frailty and illnesses of the mind. 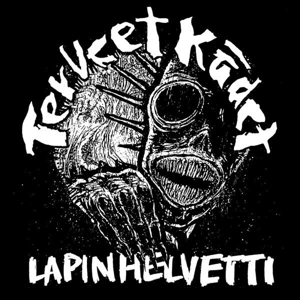