February 21st saw the digital release of TAQBIR’s first outing. Released via bandcamp and YouTube this enigmatic recording turned many heads and got many people speculating about this absolute rager of Moroccan origin. Four months later the physical version of this recording sees the light. Simply put, it was just too good to be a digital only endeavour.

The four tracks of “Victory Belongs To Those Who Fight For A Right Cause” are four short vomits of anti-religious sentiment made music. Sang in Moroccan Arabic TAQBIR’s lyrics are irreverent, careless outburst of anger towards an extremely patriarchal oppressive place.

Musically TAQBIR walks a thin line joining some of my favourite qualities in punk music. The aggression of fuckwave originators DISKOLOKOST, the nastiness of THE COMES vocalist’ Chitose and the raw reverb-drenched heavily-distorted non-production of THE SEXUAL or DESTINO FINAL. An amazing example of primative world Musik and hopefully part of a new wave of Taqwacore bands.

The record comes with a double side A4 poster with lyrics and band’s graphic. 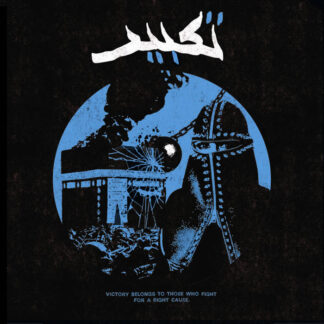 You're viewing: TAQBIR – Victory Belongs To Those Who Fight For A Right Cause 7″ €9,50
Add to cart