Tanzkommando Untergang were an international bunch staying in Berlin and playing energetic dark-goth-punk, strongly rooted in the 80’s tradition and echoing British anarcho-punk. Female vocals resemble the ones from X-Mal Deutchland. These songs come from the TKU debut demo CD (2012).
Wieże Fabryk, formed in 2000 in the industrial city of Łódź, PL, play raw cold wave with references to Joy Division and the classic Polish bands of the genre, like Made In Poland, Variete or 1984. Their side consists of four songs from their “Dym” CD (2010).
This LP was originally released in 2012 and now is being reissued on 180g vinyl, housed in a classy gatefold. 300 copies, including limited edition of 100 with an additional cover, screen-printed by the Rozbrat squat crew. 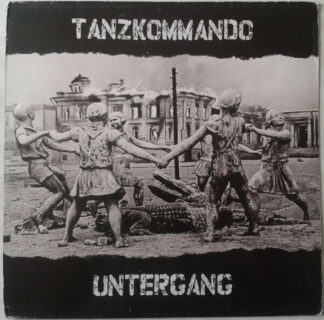