SUFFOCATE FOR FUCK SAKE – In My Blood LP

Undoubtedly, one of Sweden’s best kept underground secrets are SUFFOCATEFOR FUCK SAKE. Without having played a single show for ten yearsnow, the band ! nally shows a new sign of life by releasing the successorto their critically acclaimed album ‘Blazing Fires and Helicopters on theFrontpage of the Newspaper. There’s a War going on and I’m Marching inHeavy Boots’ from 2008. The upcoming full-length “In My Blood” comes viaMoment of Collapse Records and contains nine songs of post-rock driven,sludgy heaviness, that is buried deep down between desperation, angerand salvation.Once again, the band proves their willingness to write long-lasting songsof atmospheric soundscapes that are rounded off by layers of additionalinstruments and samples. SUFFOCATE FOR FUCK SAKE are not just knownfor crafting album concepts by using radio reports, but also for their abilityto incorporate them into their distinctive sound. With such a stylistic composition,’In My Blood’ rather assumes the form of a soundtrack than a simplealbum compiled of loose tracks. With such an intense atmosphere on ‘InMy Blood’, SUFFOCATE FOR FUCK SAKE demonstrate that they are indispensablefor the Swedish underground scene.’In My Blood’ was recorded and mixed by the band in several differentstudios and places across Sweden and Germany while being mastered byHENRIK WIKLUND afterwards. The vocal samples are taken from the radiodocumentary “Förädlade svenskar” by Bosse Lindquist. Additional vocalson the album have been contributed by CHARLEE (who is also known forperforming with the pop-act THE CHAINSMOKERS). Highly recommendablefor everyone who enjoys GODSPEED YOU BLACK EMPEROR, ENVY, CULTOF LUNA and BREACH! 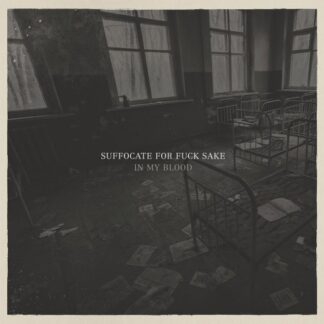