Acute altitude sickness may occur when we elevate too rapidly to 2500 meters. At extreme heights our bodies have a hard time distinguishing our oxygen and carbon dioxide levels which disorients and can even kill us.

Despite the title, Slow Worries’ new album ‘Careful Climb’ deals with other causes of disorientation, manic highs and the lonely, angst-filled confusion that comes with trying to connect over space and time. When we are willingly rendering ourselves, in desperate late night movements, to nothing more than a data vault, a new low of some sorts. When bouncing back and trying to catch up with faster moving lovers. Trying to make sense of our value in an economy of secrets. Seeing that which we share for free, for sale elsewhere. Failing to live up to the standards we inadvertently helped to create.

But all the reading into it aside, ‘Careful Climb’, soon to be released by Subroutine, Adagio830 and the first ever release on Breaking Records, is a joyful guitar-centered balancing act between 90’s licks and indie noise, full of fun despite it all and a fair amount of attitude because of it.

Slow Worries wear their influences on their sleeves. Think The Breeders, Ovlov, Slant 6 or even Sheer Mag. This is recommended listening for those who love their indierock with a good hook.

The new songs thematically center around time, space (mostly metaphysical) and movement. Live favorite ‘Runner’ as a quite literal example. But lean in and other songs tell a similar story. Respiratory cycles are a thing in the ecology of Slow Worries songs too, catching your breath and hitting the brakes as necessary tools for survival, relatable now more than ever. 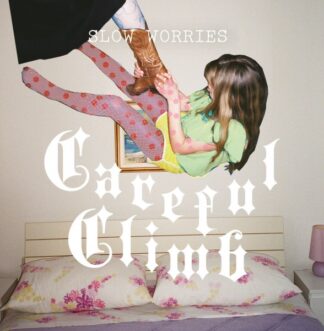