SCRAPS – Wrapped up in this society LP

Refuse Records is excited to present part two of the reissue of recordings by SCRAPS from France. This time it’s their first full-length LP, released exactly 30 years ago! The original pressing was released on vinyl by very small DIY label, Be Yourself Records, run by a friend of the band. Two years later it was released on CD on X-Mist Records in Germany, sharing that disc with the classic album “Strike the Match” by NATIONS ON FIRE (both bands were sharing the same singer – David). The first three SCRAPS 7”s from 1985-1989 set a high bar, and although the full length LP album brought a slightly subdued sound, these 17 tracks are fully energetic with fast tempos, a few melodic parts, and furious political messages. The texts accompanying the songs are aimed at those who would revive fascism in Europe, and also at racism, injustice, economic and gender inequalities, and the exploitation of animals and the earth. The song “Refuse” gave its name to a small distribution and zine, from which a small cassette (and then record) label emerged somewhere in Warsaw…and who now has the pleasure to reissue these recordings on vinyl! One-time pressing limited to 500 copies. Like the original version, the album contains a 24 page booklet with lyrics. Remastered by Smok, Studio As One. “Senseless slaughter / for empty comfort / it costs too much! / Together we can help to / abolish these crimes / WE CAN REFUSE!!!” https://refuserecords.bandcamp.com/album/wrapped-up-in-this-society-lp 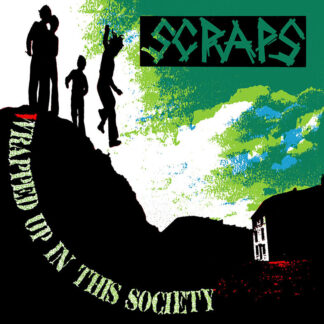