The final part in a trilogy of LPs that started with Dreamlands in 2012 (wide-eyed, naive beginnings introducing listeners to the world the records inhabit), followed by Distractions three years ago (what happens while you’re heading towards a destination, the unknowns, the unexpected outcomes), the songs that comprise Deaths are collectively about the act of finishing, an ode to ‘the ending’.Creating this album was a working research project embodying what is sometimes the hardest part of musical endeavour: completing a record. Making a new album is always daunting, but when all band members also have full-time jobs and other commitments it can also seem logistically impossible. Then there is the nagging, unattainable perfectionism that can draw out a record for months or even years – an experience that didn’t bear repeating. When is something finished Is finishing necessary to move on The album was created and facilitated through a series of deadlines. The recording studio was booked before any songs had been written. Having a deadline in advance allowed for productive freedom through limitation and finite time: five months to write the album, that was it. This meant meeting every week to write no matter how many members could make it, filling in on each other’s instruments (reminiscent of how side-project Monotony came about: writer’s block in a Sauna Youth practice – removing yourself from your role in a band removes the old expectations) and using automatic writing processes. The limited time didn’t allow for much reflection and overworking. Placeholders became final tracks through committing to songs at early stages, keeping them immediate. The album is site and time specific – those months in an archway in Peckham, which live on through samples including amp interference from trains passing overhead. It’s also very much of this specific point in history, influences, and band members’ lives. This process created a tension through trusting decisions and not questioning what was produced. The 12 tracks touch on political rhetoric, artistic legacy, action and passivity, work and leisure, and, of course, distraction, referencing many musical genres in the process while never leaving punk’s orbit. Creative living becomes more gruelling and endless than the 9 to 5 on ‘Leisure Time’, how freelance living and having multiple jobs both result in no free time. Being in a band is leisure time, but can be a lot of work. Our lives should afford us with time, but we fill it with activity.’No Personal Space’ looks at the cyclical nature of music, referencing ‘New Rose’ – the first single by a British punk band – via a drumbeat and lyrics, exploring the enclosure of the genre; a blown out recording of practising constantly interrupts the band.’Percentages’ was written at a point of political and social upheaval and problematizes the use of numbers as a form of proof. Whole groups of people have been reduced to statistics for political reasons, and people use and manipulate statistics to prove any point they want. 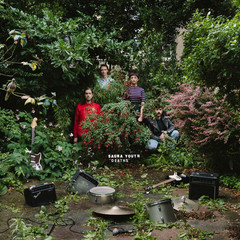