☢ROCK IS ALIVE The reactor has cracked and Sydney will never be the same. Respect rock or die. ?
☢Humanities attempt at harnessing unlimited energy has ended with disastrous results.
Sydney has been declared a toxic waste zone.
☢Terminating: life.exe…
☢Research Reactor Corporation is back from ‘meeting adjourned’ and it’s all bizniz for the Australian nuke group on their follow-up sophomore cassingle compilation LP on yours truly ERSTE THEKE TONTRÄGER.
☢ Following RRC’s blatant refusal to shut down hazardous radioactive plants, infection and violent crime continues to spread rapidly across much of Sydney’s urban areas. With public outcry being largely ignored, it’s hard to say what the future of this city holds.
☢Recorded under strict safety guidelines & cautionary measures.
☢WARNING: contains hazardous material. Long term exposure may result in cellular mutation. So rock off and fuck on.
Prof. Slime and Nuclear Crime.
☢written and recorded during a Nuclear Meltdown by the Research Reactor Corp.
Be Safe! OH/S.
☢The people have tried their best to take down the reactor once and for all, only to fail miserably. Now, its radiation emits a frenzy unlike anything seen before, leaving hazardous slimy residue on walls, while a thick blanket of radioactive smog looms over the city.
☢LIVE and extremely radioactive ☢️
☢Proceed with caution ⚠️

We’ve lost all connection to the cooling towers and the containment facility is overloaded. It’s a toxic dump of synth, slime, and snarl. It’s Pee Wee Herman starring in a Blade Runner remake; Devo writing the score for Mad Max. It’s easy to assume that nothing could top the waste dump called Research Reactor Corp. but compared to this new piece of plastic that outdated thing is (nuclear) decommissioned.

This – dare I say – experimental compilation comes crashing through the safety doors and slams into some previously untapped atomic potential. It’s angry and frantic; just the way I prefer music. Everything about Research Reactor Corp. indicates chaos, but amid the hazardous material is a groove that keeps you ticking. When the plane goes down, make sure you have your oxygen mask on – kind of feeling. You could call it some kind of “Toxic Beat”.

The entire LP is a big safety siren that you’ve wasted your life in this hazardous hunk, the subconscious warning signal telling you to wake up from an experimental drug induced coma. Either way, I’m wide awake and grooving. 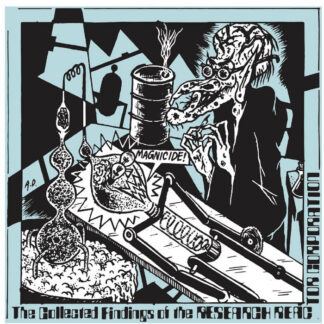