POWERPLANT People in the Sun LP

Sometimes I am bored of “new bands”, sometimes I think will there ever be a band so exciting to bring me to the point of “I have to release this record asap” and sometimes there is just one answer – YES! One of the best synth punk albums that I’ve listened to in a while (like a long time). London’s lo-fi synth punk, 2nd album and what a ripper!

I think this record is eggcellent ! For all the eggpunks out there, we did it again! Haven’t been this molested by good music in a while the whole album is killer and need to be played loud so everybody can hear it.

The London one-man synth and garagepunk project is launching its first proper full-length release after some of its already very delicious singles and EPs. I have to say that Theo Zhykharyev just topped the recent short players with this album. The record is actually just one thing – one complete highlight.

Something between Screamers meets early Numan/Tubeway Army and a health dose of DC hardcore. Awesome stuff! Energetic and slightly insane – it’s hard not to love it. I think this will end up being one of the albums you whip out when someone claims no one makes great music anymore.

Remastered for your listenig pleasure! 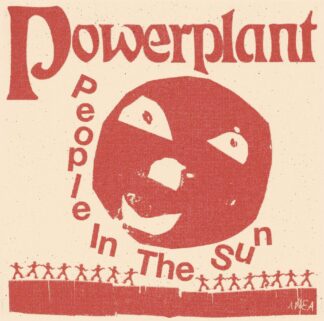 You're viewing: POWERPLANT People in the Sun LP €14,00 incl. VAT
Add to cart