“Philadelphia death rock/dungeon punk band Poison Ruïn consolidate their two EPs into one ten-song, self-titled album. Brained, fleshed, and recorded by Mac Kennedy, this effort is one of a personal nature.
The sonic nature of the album has a human looseness, apparent like a cassette tape warbling from being wound and rewound. At times the songs sound thin and brittle, as though they are breaking apart simply by being played.
The lyrics walk the same path and describe a world of cosmic horrors and environmental disaster. With their soft, eerie, medieval-hall introductions, each song transports the listener to a world of runes and swords, but staves off dorkiness with the relevance of a chewy post-punk center.
Rife with sweetly stark guitar hooks and drums that flail like a death march, this self-titled LP gives off black metal at first glance. On further inspection, there is a gradation of inspirations ranging from pond-hopping blues guitar solos, heavy-handed punk drumming, gothic ambiance, and progressive song structures.” 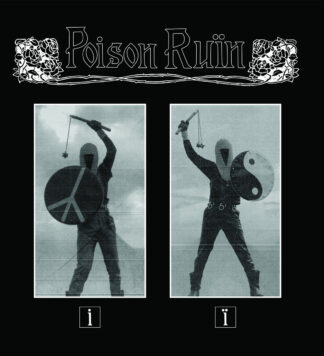