PHYSIQUE – The Rhythm of Brutality MLP

Sometimes a band just builds a kind of momentum where they just produce more and more rippers and Olympia’s PHYSIQUE are clearly locked into a serious groove. ‘THE RHYTHM OF BRUTALITY’, their third 12″ in a year and a half, and released in time for their upcoming rampage across Europe, is another uncompromising slice of crasher crust ugliness, guitars hissing and squealing in anguish, searing radiation-buzz noise crudely marshalled into seven nasty hardcore salvos, from the punchy d-beat of ‘We Make Noise’ to the punishing stomp of the title track and ‘Miserable Existence’, with its propulsive rolling punk beat half-drowned in feedback filth. PHYSIQUE slam together a knack for disgusting sonics with rock solid riffs for a rawpunk record in the vein of Disaster or Fader War that will scour the paint from your walls.

Comes with a big foldout poster for your bedroom wall. 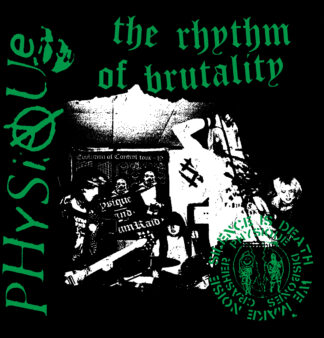 You're viewing: PHYSIQUE – The Rhythm of Brutality MLP €15,00 incl. VAT
Add to cart