Formed in 1979 in new town Harlow, The Newtown Neurotics are one of the most under rated but essential punk bands. Kick Out! is a 15 track round up of their first six singles taking in the years 1979 to 1984. The first two singles Hypocrite and When The Oil Runs Out were melodic nuggets released on their own No Wonder label. Both of these singles were written prior to the election of the Thatcher monster. The horror of this event changed what was the non-political writing style of Steve’s lyrics into the other extreme, and so in June 1982 Kick Out The Tories was released on CNT records. Sadly 38 years later, the lyrics are most poignant and needed than ever. The band continued releasing single after single from the painfully personal to the politically pertinent, all done with intelligence and style. Also included is Andy Is A Corporatist / Mindless Version taken from the Son of Oi! compilation. The album comes with a 32 page booklet of archive – photos, reviews, interviews and more and was conceived to be released alongside the Documentary of the same name about the band’s history.

Be the first to review “NEWTOWN NEUROTICS – Kick Out! LP” Cancel reply 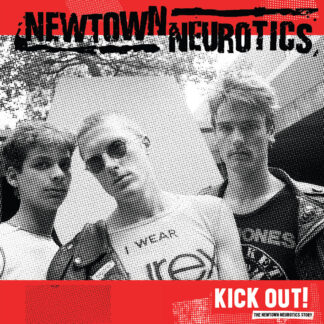