Neon again ? Yes, Neon again, this time as an american press “licence press” co-released with Water Wing Records. Thick cardboard Pocket Sleeve with different Artwork and different innersleeve. Info : We, Astrid Spirig (vocals/later LILIPUT), Dagmar Heinrich (guitar), Loredana Zandonella (bass), and Gitta Gsell (drums), met in May 1978 in Zurich and formed NEON. None of us had ever played an instrument before! But, we were all animated by the spontaneous, creative, and rebellious spirit of Punk… Then, in December, a performance on Swiss television took place for a program about “women in show business.” The TV appearance did not make us happy at all. The recordings for our songs were done in a music studio and we had to fight hard for them. In 2016, Dagmar found an old cassette at her home with the recordings of the two songs “Neon” and “Nazi Schatzi.” We are especially keen about NEON being released on Water Wing Records – this nearly 40 years afterwards and then also on vinyl! 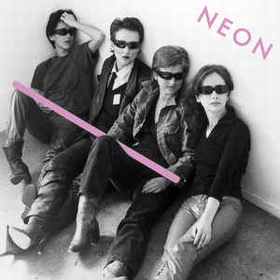