I believe punk has found a rightful home in the Land Down Under.

Byron Bay’s greatest and grittiest garage rock band, Mini Skirt, have just dropped their debut record. So proud of these boys, couldn’t think of a better debut album .This album is literally a BOMB! Raw, melodic, powerful from the beginning till the last song. Laid back and in your face – this is a brilliant album! Aussies mate. The music scene out there is untouchable. A Top tier album.

It took us long enough. But everything about that floating penal rock calls for punk music. It’s hot, it’s dry (and still savage). The poison still flows beneath the ground there, something I can’t say about many other places. Where punk all began is another thing that is still debated today. I say it started in blue collar America. It was then sent across the pond by cannon fodder, and took its truest form there. What made punk so ludicrous was when it was adopted by the English accent. It fit it so well. Something about the grit and deficit of what once was sophisticated being translated into quick bursts of new English rule solidified the genre.

That was before we heard Australia take a kraken at it. Sure, there’s been Australian punk before now, but it was always under the guise of what was popular in the brother world and never of what was right around them. You would have never known bands like Scientists or The Saints were from Australia because there was no pride and (anti)nationalism to it. Most importantly, there was no accent.

Now, and thankfully I might add, Australia has grabbed the globe by the balls, and by their own terms too. We lap it up like dogs, say thank you and may we have another, from early King Gizzard, The Chats and Amyl and the Sniffers to the blokes from Byron in question: Mini Skirt. I first heard these guys on their debut EP Taste which was a rat-tailed beauty of Aussie gain-punted smut. I admired its lust for life and its barley breath right in your ear at all times.

The debut album, near four years later, is an only-slightly-more-polished version of this. The TV eye is clearer than ever on “With Your Hands,” and the union jack-off sails at full mast on the hot single “Brigantine St.” Mini Skirt is responsible for some of the hardest hitting outback music out there. The grit is real. It’s all in the lead singer’s heavily accented delivery. It’ll put a cat scratch in yer throat. It’s not all rabid politik – there’s also the tale of daily Aussie life that we know not but love all the same.

After hearing the latest of the Aussie punk sound with Casino, the Commonwealth is a place I’d like to see someday. But if I never do, I can always stick my head in the sand and think punk thoughts.

Four years have passed since Mini Skirt’s first demo ‘Mate’ and it’s been three years since their breakout hit ‘Dying Majority’ shot them into local pub stardom. Now the Mini Skirt fellas are back with those distinctive riffs, raspy Aussie-accented vocals and lyrics that serve as gritty blue-collar poetry. In line with Mini Skirt’s back catalogue of raw and real pub songs, ‘Casino’ digs through the modern Australian experience, spanning subject matter such as British colonisation, cultural and political polarisation and working with your hands.

‘Casino’ refers not to a glitzy gambling facility but to the regional Northern NSW town where the band took a trip to write some songs. The album was recorded at The Music Farm in Coorabell, on Bundjalung Land.

Mini Skirt would like to acknowledge the Arakwal Bumberlin people of the Bundjalung Nation who are the Traditional Custodians of the land on which this record was written and recorded. We respect their living culture, connection to land, waters and community. We extend our respect to Elders past, present and future. 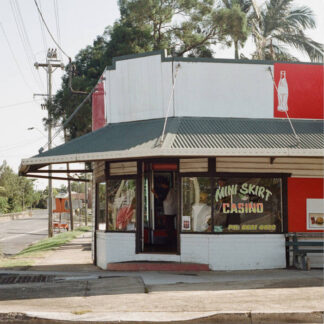