View cart “BAESTIEN – Uroboros LP” has been added to your cart.

LUMPY AND THE DUMPERS – Those Pickled Fuckers LP

Since emerging five years ago Lumpy and the Dumpers have gone from being aberrant oddballs to key figures in a whole scene of weirdo punk. Through Lumpy Records and its influence a grubby morrass of freak punk has bubbled to the surface in their slimy wake. Those Pickled Fuckers is the sound of a band distinguishing themselves from a sound they inspired, not falling into the easiness of a sound, finding new ways to express their grubby vision while retaining the essential muck that made people take notice in the first place.Over seven tracks of gritty discomfort punk, bulging with bodyhorror blues and puerile manic imprecations, Lumpy and the Dumpers revel and writhe in the effluvia of life and the rude pangs and oozings of flesh.Revivifying the dead metaphor of the earworm, these songs burrow snugly into your brain, distorted sing-song playground melodies, like hell dimension children’s show theme songs, exploding with weird turns and twists, from the blaring horns of Someone’s In The House’s paranoiac stomp, to the wild malfunctioning chiptune screams cutting through Attention and the sinister whoops and crashes of the oddly mellow Clatter Song, Those Pickled Fuckers is an album only Lumpy and the Dumpers could’ve made.﻿ (Joe Briggs)Those Pickled Fuckers comes housed in a heavy reverse board sleeve designed by Lumpy himself and comes with lyric insert and download code. https://lavidaesunmus.bandcamp.com/album/those-pickled-fuckers-mlp 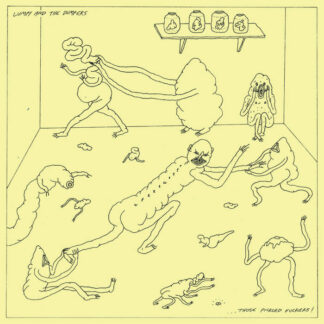 You're viewing: LUMPY AND THE DUMPERS – Those Pickled Fuckers LP €12,00
Add to cart