Karma Sutra were an anarcho pacifist band from Luton, Bedfordshire who formed in the early 80’s after the demise of the legendary the Phallic Symbols. Karma Sutra only had one release at the time – an album self released in 1987 called Daydreams of a Production Line Worker which came towards the end of their lifetime. Sealed Records now release the earlier years of demos and compilation tracks on a 15 track round up. Be Cruel with Your Past and all Who Seek to Keep you There includes their first and primitive demo The New Economy Roast from 1983. It’s very basic and has a Bullshit Detector Compilation quality to it. A few years later came the second demo Shoppers Paradise which is the best material Karma Sutra recorded. Six tracks of well produced classic 80’s Anarcho punk with a driving sound. It’s passionate, tuneful and politically aware. How this wasn’t released at the time on vinyl, is a travesty. Also included is two tracks from the Mortarhate Compilations Who? What? Why? When? Where? and We Don’t Want Your Fucking Law!. Finally the last three tracks were from the final line up of the band and were recorded with Spon from UK Decay adding more post punk elements to the sound.

The LP comes with a 40 page booklet of Lyrics, handouts, fanzine interviews and statements. 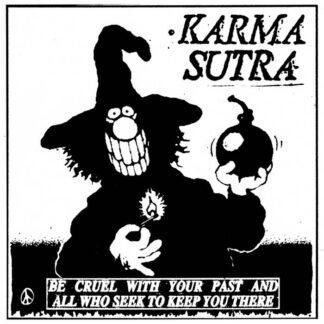 You're viewing: KARMA SUTRA – Be Cruel With Your Past And All Who Seek To Keep You LP €22,00 incl. VAT
Add to cart