Invalid’s cassette-only debut, Do Not Resuscitate, came out on their hometown label Cruel Noise Records early in 2020 and, for me, it was love at first listen. Invalid plays hardcore in the tradition of Black Flag’s Damaged, deploying sophistication and craft not to show off, but as tools that allow them to go further and deeper as they exorcise their demons. Invalid’s bulldozer intensity is the first thing that grabs you, but the great riffs and songs keep you coming back, every track containing an improbable hook like the martial chant of “Wake up / eat / shit” in “This Life,” the primal howl of “wasting away” in the chorus to “Escape,” or the instant-classic intro riff to “Stupid Pills.” Fans of records like Direct Control’s first 7”, C.O.C.’s Eye for an Eye, and Unseen Force’s In Search of the Truth are perhaps best primed to appreciate Invalid’s punishing yet catchy and energetic style of hardcore. This self-titled LP contains all eight tracks from Do Not Resuscitate plus six new ones cast from the same mold. 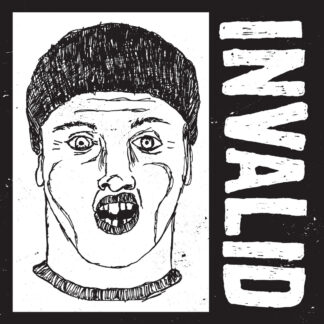