Fatamorgana is the Universe, and Ahora Aquí, Todavía No the journey that will take you through it. Patrycja and Louis will be your guides, and with their Bass Station, RX11, JP-8000 and ethereal voices acting as a synth-pop spaceship, all the marvels and mysteries they have seen will be revealed, because they “want to fly and swim at once, forever, in another density”. The Barcelona-based duo continue to hone their brand of electronic post-punk, dishing out beats, hooks and atmospherics in generous servings, and whilst it retains much of the stark minimalism of their first LP (2019’s Terra Alta), Ahora Aquí, Todavía No somehow feels deeper, more lush and considered. Clearly influenced by music from the 1980s – synth-pop, new wave, post-punk – Fatamorgana manage to create a sound that avoids standard retro manouevering, landing instead on something distinctly their own – an album made from cold sounds, that in their union become warm. A record that could just as easily soundtrack an afternoon’s solitary contemplation as a night on the dancefloor. 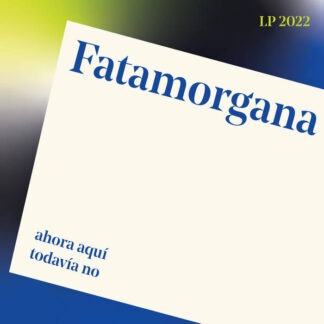