ES – Less Of Everything LP

Less of Everything. The title of Es’ first full length LP could be interpreted as a manifesto pledge, an outright demand or a purely literal sonic descriptor of the London quartet’s glacial form of punk rock music. This tension between intent and interpretation has been a fundamental element of the group’s output from their formation.Es is Maria Cecilia Tedemalm (vocals), Katy Cotterell (bass), Tamsin M. Leach (drums) and Flora Watters (keyboards). Their 2016 debut EP, Object Relations, released on influential London punk label La Vida Es Un Mus, was described as “mutant synth-punk for our dystopian present” (Jess Skolnik, Bandcamp, Pitchfork). The band has since become a vital presence in London’s underground DIY music scene, as well as having toured the UK with the Thurston Moore Group in 2017. 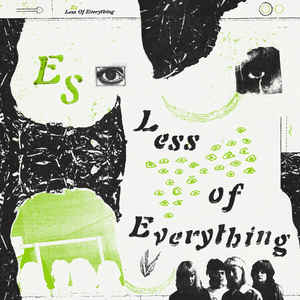