The Débils from Biene where the only Swisspunk band (and Spontan) from the second generation, that did release an LP in the early 1980. Their direction was resolute: autodidactic, nonconformist, and apolitical. This was contrary to the intellectual Punk from Geneva or the vain “real and hard “;-) Züri Punx. And, more akin to the Bernese groove, with a touch of francophone mixed within and all songs in french. It’s a 100% Swisspunk record and every song on it is a banger! The original record from 1981 is almost impossible to find, so we did take all songs from the master tape. On top this record comes with a really heavy tip-on (gatefold) sleeve, with an 4 panel insert which contains flyers, pictures, lyrics and some history ! Graphic design by Paco Mus ! For Fans of Punk, Skinheads, Crisis, Kidnap, Camera Silens and OFF course Swisspunk ! One time Press of just 488 copies.

Be the first to review “DEBILS s/t LP” Cancel reply 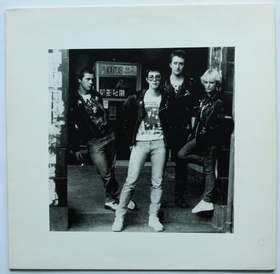