CRY OUT More Echoes Of A Question Never Answered… Why? 12

More Echoes Of A Question Never Answered… Why? 12” is the posthumous release of Rosie Davis’s solo project. On it the Nova Scotia artist poured all her soul into four very special songs, which were not fully completed by the time of her passing. The DIY recording is crude and rudimentary, and obviously influenced by the golden era of British anarcho punk but with nods to so many colourful elements. Mixing CRASS, FLUX OF PINK INDIANS, HONEY BANE and SAD LOVERS AND GIANTS to create a very personal drum machine fuelled punk record. With very personal lyrics giving the recording a layer of intimacy and creating a record clearly of its time.

The sleeve artwork was designed by Rosie herself with a back cover pieced together with some artwork the family had. The record comes with an 8-page lyric booklet in a 300 press and the proceeds for its sale will be donated to Rosie’s family. 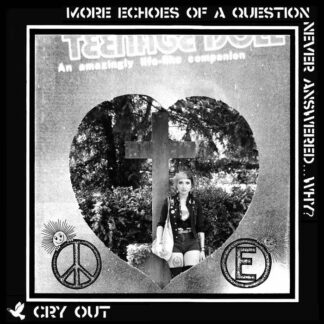