Children Of Finland Fighting In Norway aka C.O.F.F.I.N is an Australian punk band who have accepted the mental of their nation’s long legacy of greasy-haired, outback-scrounging, garage rock rumblers, blowing out eardrums and amps one stage at a time, while chiseling their name below those of Radio Birdman and The Hard-Ons in petrol station bathroom stalls across New South Wales and beyond.

C.O.F.F.I.N’s were planning on taking their sweaty, slug-trailed tunes and cracked cavalcade on the road this year, hell-bent on mopping up the USA while on tour with Amyl and the Sniffers, but due to COVID, those plans had to take a short dirt nap. The record they were planning to tour on is out though, and it is a bar-none, bar-room crashing, banger!

The latest self-titled album from C.O.F.F.I.N’s is their fourth LP overall and retains a lot of the attitude from their previous releases. It unleashes a raging rip of rock fury that blazes like a wildfire, kept alive and deadly by the bellow-like thump and growl of drummer and vocalist Ben Portnoy whirlwind conjuring percussion and libido-pumping leads and grooves of the band’s three guitarists, Abijah Rado, Arthur Flanders, and Aaron Moss.

Not unsurprisingly, C.O.F.F.I.N shares a lot in common stylistically with angst-primed, countryfied garage of groups like The Murder Junkies. To that point, they’ll often close out sets with a GG Allin song and the original cover of their 2018 Piss​~​Up depicted the band peeing into their own mouths (and the alternative cover isn’t much better). But it’s on matters of ethics and principals, rather than style and image, where the C.O.F.F.I.N diverges from many of their influences. What may appears on the outside like a bunch of boys having a gay old-time while playing recklessly loud and loose rock ‘n roll, is in reality a layered experience of conscientiousness and social engagement (in addition to a bunch of guys messing around and making a god damned racket!).

Case in point, C.O.F.F.I.N’s track “Dead Land,” which takes up the issues of environmental degradation, the encroachment development on wildlife habitats, and the devastating impacts of global warming, all with the fires that nearly consumed their native country this past year, billowing at the top of mind, with its lusty appetite for destruction in the foreground. If the land dies, it will be humanity’s fault, and presently we as a species show no signs of abating our march towards a fallow Earth.

Socials issues are of great concern to the band as well. In interviews, Portnoy and other band members will speak candidly about the need to confront homophobia and end racism in Australia and around the world. C.O.F.F.I.N may take the piss (literally) when it comes to themselves and their music, but when it comes to the subject matter of their songs, they clearly intend to inspire reflection and action, as much, or more, than simply a rowdy, good time.

As guitarist Abijah Rado told Monster Children back in July, “Now is a time that, through collective unity, people’s voices are finally being heard and acknowledged. The whole system needs to change and that will never happen overnight, but it’s good to see that the ball has started rolling towards implementing these necessary adjustments.” 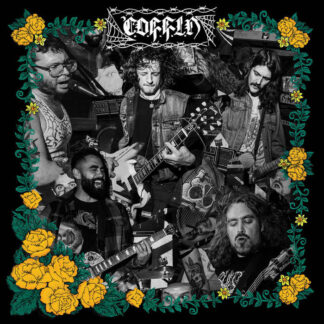 You're viewing: COFFIN – Children Of Finland Fighting In Norway LP €18,00
Add to cart