“You ever wonder what Keith Morris does at the end of the day? Does he maintain that wide-eyed stare, the one that pins audiences to the floor with its very intensity, while he’s putting on his pyjamas? Does he continue spitting venom from that heroically ragged throat of his while he’s making his cocoa? Does he lay his head on his pillow with the same righteous fury that launched thousands upon thousands of moshpits? Hey, I’m just wondering. Y’see, all that intensity and venom and fury_ it has to go somewhere while he’s otherwise occupied with mundane tasks like taking off his socks or brushing his teeth, right? And listening to the thrilling racket conjured up by Vancouver’s Chain Whip, you’d be forgiven for thinking that they have somehow become vessels for that energy. I mean, they’re Morris’ spiritual successors – if their 2019 debut ’14 Lashes’ wasn’t enough of a clue, then this six-song blast of blink-and-you’ll-miss-it brilliance should leave you in no doubt. This is hardcore punk as it was originally conceived, and it slays. ‘But who are Chain Whip?’ I hear you ask. Well, they’re a bunch of dudes from British Columbia who’ve also served time in bands like The Jolts, Fashionism and Corner Boys (among others). They’re the ones who are gonna have you slashing the seats at your local cinema, or taking potshots at lines of empty bottles on street corners, cuz they make you feel so damn tuff. OK, I’m just goofing around here – whereas Chain Whip are serious business. No, really. I dare you to listen to the Germs-go-nuclear b(‘)last of ‘Laguna Bleach’, or the garage-slop-at-200-mph rush of ‘Fresh Paint And Philanthropy’, and not want to launch a stink bomb into your teacher’s car. Or, failing that, to bring about the extinction of global capitalism. If that fails, you’ll just end up wearing out the grooves of this very fine six-song EP while bouncing between walls like the DRI logo guy if he wore jet heels and spring-loaded shoulder pads. Jeez, imagine Keith finishing the night shift and giving these guys a handover. As if they’d even need to be told. Look, Chain Whip are the best straight-up old-skool punk band you’ll hear today. You know what to do. Trust your instincts. Dance that two-step to hell with ’em. This. Is. The. Shit.” Will Fitzpatrick 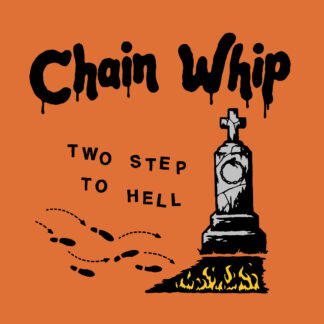