Right-wing governments. Riots following sickening, racist police brutality. The general feeling that these are end times and the human race we know it is hurtling towards a doom of its own foolish making. Yessir, you can draw a lot of parallels between 2020 and the 1980s, although obviously as soon as anyone says it’s worth suffering all this because ‘the tunes will be better’, you are obliged to call them a fucking moron, set their hair on fire and give them a wedgie for good measure.

Still, just as good tunes are undoubtedly a good thing, so too are absolutely blazing, ear-shredding, soul-soaring, fist-raising punk rock songs. Especially ones that race by at 150mph, while implicitly daring you to scream along with every line and probably dismantle all your furniture by bouncing all over it. Just ask Chain Whip; they know all about it.

Hailing from the Canadian city of Vancouver and comprising members of Fashionism, Corner Boys and more, Chain Whip don’t so much sound ‘in thrall’ to the sounds of 1980s hardcore punk as ‘completely inhabited by the spirit’ of it, in the best way possible. They snarl, they holler, they roar and by gosh every single cut on debut album ‘14 Lashes’ is a thrill ride and a half. Originally released in 2019 on their own Chain Whip Records (makes sense), it gathers together 14 (also makes sense) blasts of irresistible fury in under 20 minutes, with subjects ranging from half-baked cultural commentators to not wanting to live in a fucked-up world (say it three times: this makes sense). This is hardcore as in ‘the snottiest rock’n’roll imaginable’; no shitty metal involved.

They’re at their best when exploding in under 60 seconds, like on the very cross ‘Spectator’, but two-minute epic ‘Turner Street Ghost Motel’ reveals something dangerously close to Dead Kennedys-style melody that could make Chain Whip ones to stick with for the long haul. Well, that’s assuming they’re even in it for the long haul; maybe this is the last we’ll see of ‘em and this blizzard of brilliance that sounds like DOA, the Germs and Career Suicide punching holes in the side of a mountain is all we’ll have to remember ‘em by. If that’s how this is all gonna play out, I implore you to buy this record -. you owe it to yourself to hear it before we and they meet our grisly fate.”
Will Fitzpatrick. 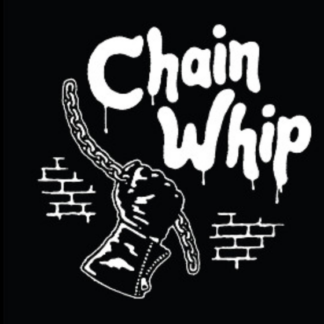