BALAFRE is a new Post-Punk band from Caen, France. The Band features a few well known members that already had their share in the french DIY-scene by putting out music with bands such as Aussitôt Mort/Mort Mort Mort,Pan D, Karysun, SugartownCabaret & The Eye Of Time.
On „Boxing Songs“ BALAFRE present four songs on a one-sided 12inch vinyl, that marksthe first proper release. Musicwise this band takes a lot of influences from classic 80’sWave,as well as newer Post-Punk. The entire runningtime is layed in a fog of melancholy and inhibition.Within these songs you can hear catchyand bright Indie-Rock on one side,as well as gloomy and dark New-Wave and Shoegaze on the other.These tracks displays that recurring theme of inescapable sadness but also joy and hope, executed with the repeated guitar melodies, almost danceable drum rhythmsand mixed vocals (female and male).Not only does it feel classic, memorable and instrumentally moody, but also cripplingly dark and solemn.This debut is highly recommended to everybody who fell in love with bands such as Soft Kill, Drab Majesty and Fotocrime. 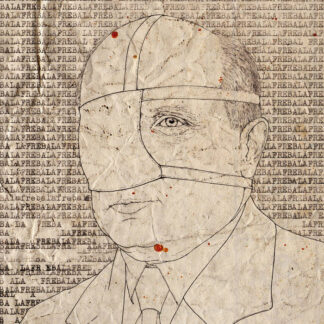