Ancst have returned with a new recording that continues the mixture of black metal and crust from previous recordings and this is a review of their 2016 album “Moloch “- A very heavy, raw and aggressive sound starts off the album along with some angry black metal screams and after awhile melodies make their presence known on the recording and all of the musical instruments have a very powerful sound to them and when the music speeds up a great amount of blast beats can be heard.Tremolo picking can be heard in the faster sections of the songs and the music also mixes in a great amount of crust and post hardcore elements while the solos and leads bring more of a melodic style to the recording and throughout the recording you can hear a great mixture of slow, mid paced and fast parts and on later tracks the vocals start using more growls that also expand on the hardcore influences of the bands musical style and later songs bring in a small amount of clean playing and spoken word parts. Ancst creates another recording t hat takes raw black metal, crust, post hardcore and screamo and mixes them together to create another very heavy recording, the production sounds very powerful while the lyrics cover modern world issues. “occultblackmetalzine

Be the first to review “ANCST Moloch LP” Cancel reply 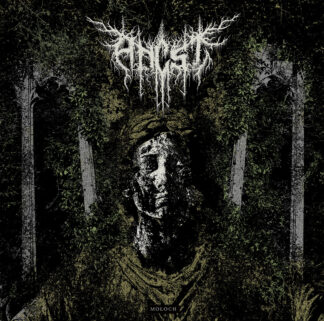