The self-described “amoral, anti-humanist, anti-civilization, and individualist” horde known as Storm of Sedition call BC, Canada home. Having freshly dropped their third LP, Howl of Dynamite, available on cassette via Calgary’s Doomed Society Records, they’ve captured the sound of our collective death knell.

Following the opening gambit of their 2014 S/T full-length with the scythe sharp blast of blackened crust that was 2016’s Decivilize, they’ve managed a soundtrack befitting the slit-throat death throes of fascists and deconstruction itself. Sharing members with genre titans Iskra, the full range of their genre-flaying powers is on display throughout the long player.

As if intent on sonically inciting the world’s final riots, the band’s Allied powers would align not by nation but sound. Imagine the crypt-beckoning shriek of Scandi black metal, the pulverizing chug of death metal’s more straightforward moments, and the ardently punk end of crust and you’re getting close… but Storm of Sedition’s secret weapon, discernible or not, is in their vision. In both ethos and presentation, the band is a fully realized and deadly proposition. Though myriad moments achieve their anarchic intent, for me the opener’s immediacy is as good a place as any to peer into the void that is their nightmarish vision.

“Red Laughter” is the perfect distillation of SOS at their harrowing best. Seemingly broken into suites, the opening squealing storm of feedback feels more like a death rattle than actual instrumentation. Though the subsequent explosion hits as expected, it’s as if we’re trapped in the moment awaiting the bomb to make landfall. We’re hit with instant devastation and the blackened guitar pairs with hideous flourishes of death metal’s anvil heavy chug.

The dual vocal attack quickly makes its presence known, the effect of pitting the higher register howling of a demoniac against a low-end growler is D-beat perfection. Between the seamless passages of tremolo flurries and bone crusher DM riffs, they manage to inject a world-baiting dose of apocalyptic-minded crust punk that feels altogether new. The track’s final minute is a descending brutal guitar run replete with a melting bass sound that’s immediately swallowed by blistering leads, scathing solos, and the frenzied pound of Dis-beat drumming. Their sound feels like the midpoint in a Venn diagram that includes all of extreme music’s crumbling touchstones, perfectly captured and mastered by Audiosiege’s Brad Boatright (drum Engineering done by Jesse Gander at Rain City Studios, guitars, bass, and vocals recorded and mixed at Circle A Studios.).

Lyrically, the scope of their carefully chosen mission statement is as epic as the Scorched Earth they envision. Joining the ranks of crust punk’s most fully realized and incendiary, the lyrics look forward to nothing if not full collapse. Eschewing the plaintive sloganeering of D-beat butt-flappery, they opt for the hyper-literate and poetic moments of the Futurist movement. Littered with moments of transcendent turns of phrase like “As the poet transforms his lyre into a dagger! As the philosopher transforms his probe into a bomb…” it’s vehement delivery feels capable of toppling monarchs and reducing an empire to rubble and ash, leaving crumbling monoliths and dystopian devastation in their wake.

Storm of Sedition may have just crafted on of the year’s best LPs. They likely don’t even want you to like it, though I’m guessing you will. 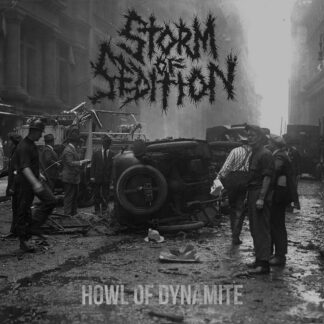 You're viewing: STORM OF SEDITION – Howl Of Dynamite LP €12,00
Add to cart