Кальк (chalk in English) is a three-piece screamo band from Kiel, Germany, which was born in 2016.
At some point in the beginning the band was half-joking around the idea and finally added synths to their sound which is only one part that makes them so special. Another thing which stands out is the fact that due to Anna’s heritage most songs are sung in Russian (hence the band’s name and album title in Cyrillic script).

Кальк’s self-titled debut LP was more of a straight-forward, short aggressive punk record with only a minimal use of synths accents here and there. For their new album “Олень на вершине холма” (“A deer on top of a hill”) Кальк developed their sound toward a classic screamo style while also creating more room for the synths which are becoming an equally important instrument, almost being a melodic counterpart to Anna’s fierce vocal works, the noisy guitars and powerful drums. 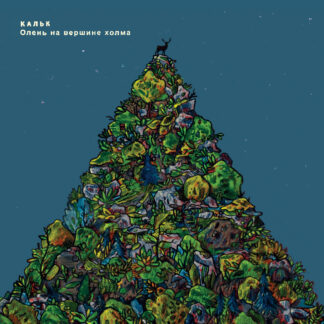